What You Need to Know About Drupal 9

Happy birthday! Drupal 9 was officially released on June 3rd, 2020 and is available to start using today.

But what does this mean for the thousands of websites currently using Drupal 8 (and earlier)? Do you have to upgrade? Will your existing Drupal site no longer be supported? What is new and how different is it from the Drupal we know?

Let’s take a look at these questions, review the upgrade process and highlight what’s new or changed with the latest version of this popular open-source CMS.

Paragraphs
About the Upgrade

If you’re running Drupal 8, first of all, don’t worry! You still have almost a year and half to upgrade. Drupal 8 (like Drupal 7) will continue to be officially supported until November 2021. While time does fly by quickly, that is plenty of time to plan for your next site upgrade.

Most of the popular modules, if not all, are already ready for use in Drupal 9. And the underlying architecture remains the same. In fact, the latest version of Drupal 8 (8.9) is essentially the same as Drupal 9.0. This is all by design.

When Drupal 8 was released, it was a major rebuild of Drupal, with so many things added, changed or reworked, all in the name of keeping Drupal powerful and relevant for years to come. Those changes had a cost, however. The path to upgrading was (for most) a long and difficult process, often akin to rebuilding your site and starting over.

If you’ve gone through the upgrade to Drupal 8 already, congratulations! You already have a modern CMS that is ready for an easy upgrade to Drupal 9. If you’re still running Drupal 7, you’ll want to read more about the upgrade process on a different post, and decide soon how you’d like to proceed.

Start by upgrading your site to the latest version of Drupal 8. At a minimum this means Drupal 8.9 (just released as of this publishing). This will ensure your database is ready for the upgrade.

For contributed themes, check their individual project pages for any important notes or bugs concerning the upgrade. Custom templates should continue to work as before, as Twig remains the underlying template language.

Custom modules and other scripts may require some small changes to remove any deprecated code prior to upgrade. You can review the requirements online and make adjustments as needed. There are tools online to make the process easier by reviewing your code and automating code upgrades, such as Drupal Rector.

After completing these steps, download a new copy of Drupal 9 and run update.php. As always, don’t do this on your live site! First run the upgrades on a test copy of your site, and make sure everything is working properly. Confidence is high that this will be a smooth transition. After all the effort involved in upgrading Drupal from previous versions, this is a BIG WIN!

Probably the biggest “feature” so far is how easy it is to upgrade from Drupal 8. Drupal 9.0 is essentially the same as Drupal 8.9. So there’s not a whole lot (yet) to get excited about with Drupal 9. But there are still reasons to upgrade.

By upgrading to Drupal 9, your site will be ready to take advantage of the next set of new features. Much like Drupal 8, there will continue to be minor release cycles every 6 months to add new features to your Drupal site. Drupal 9.1.0 is scheduled for release on December 2nd, 2020. 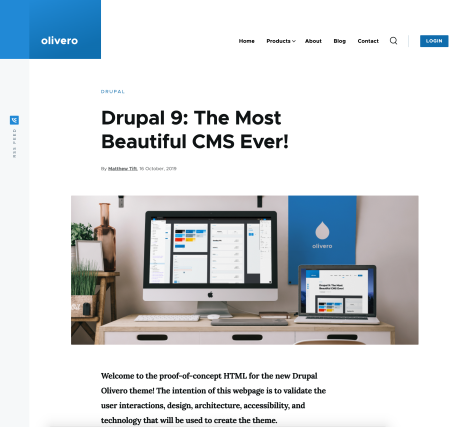 Future plans include upgrades to many of the core third-party tools powering Drupal, including an upgrade of Symfony from 3 to 4, and an upgrade to the Twig templating engine to version 2.0. Drupal 9 will also soon feature new core base theme, Olivero.

Drupal 8 has been running its own default base theme, Bartik, for over 9 years and it’s definitely showing its age. While most of Electric Citizen’s work relies on custom themes, for those who wish to get a Drupal 9 site up quickly and easily, this is great news. You can get a quick live demo of Olivero in action online.

Thinking of upgrading to Drupal 9? Still stuck on Drupal 7? We're here to help, from full redesigning to ongoing site support and maintenance.