In Mastering Drupal 8 Multilingual: Part 1 of 3, we focused on planning for Drupal 8 multilingual and its impact on a project's timeline and budget.

In Part 2 (below), we cover everything you need to know to have a functioning multilingual site with no custom code. Part 3 of the series covers more advanced techniques for site builders and front-end developers.

All of the modules needed for a Drupal 8 multilingual site are core modules, included in every Drupal 8 install by default! Simply login as a site administrator, browse to the Extend page, check the Multilingual boxes and click install (or install via the command line). 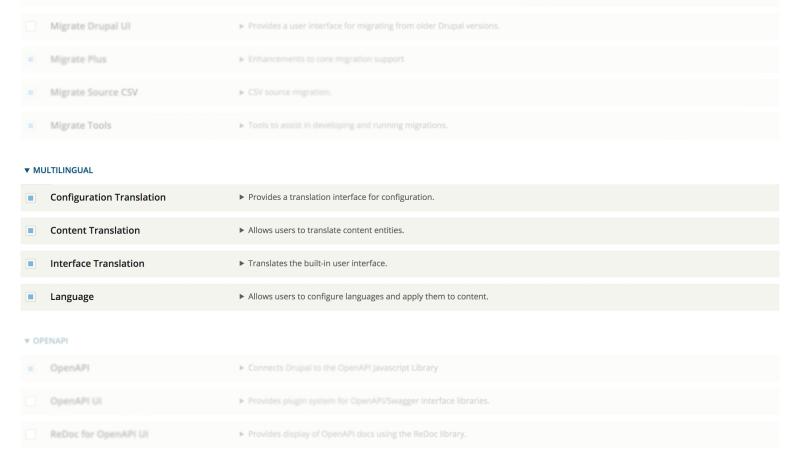 Drupal already comes with 100 languages to choose from, and you can also add custom languages. This means that you can translate content into any language you can think of with no limitations.

Note: You will often see errors or PHP warnings when installing default languages. This is due to the difficulty of keeping 100 languages updated with all the changes between Drupal versions and compatibility with the vast sphere of contributed modules. Do not worry, the language will still work perfectly for content, configuration, and custom string translations. 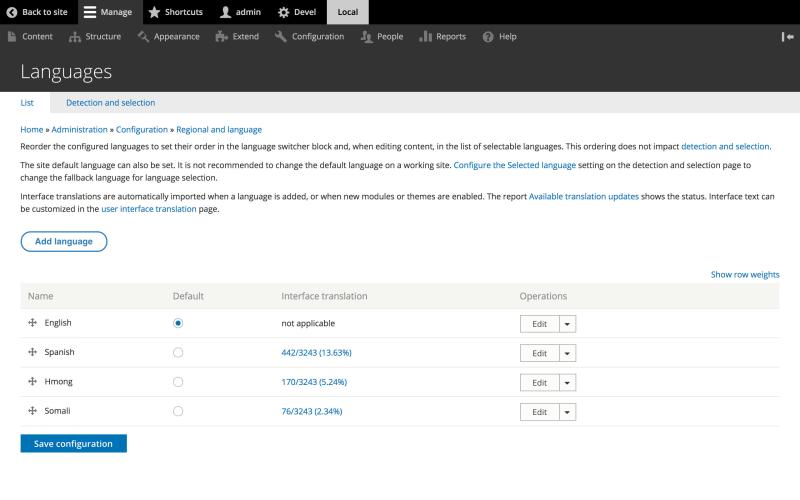 Using approved language codes will prevent fatal errors with Views and other possible bugs. The list of approved codes may not contain the specific code you want to use for the language prefix—often seen in the URL when viewing the site in a different language–but the prefixes can customized to display whatever you want to the end-user.

Once you add a language to the site, the Drupal language switcher block will become available to your list of blocks. Place this via block layout (or your own preferred method) to allow users to change the site language. The page header is a typical location.

After you've added all of the languages you need for the site, click on the 'Detect and selection tab' in the languages interface. The settings here will let Drupal know how to tell which language to display. Each method has pros and cons, depending on your site and user base. We prefer the URL method. Using this method will add the language prefix of the user-selected language to the URL and will keep the site in that language until a different language is selected or the prefix is manually removed from the URL. 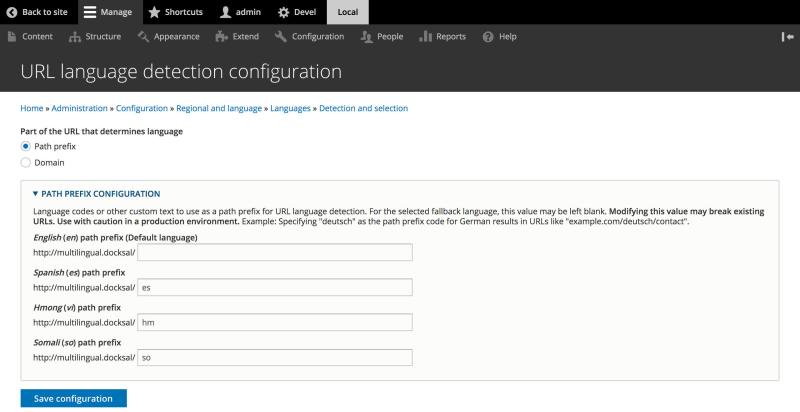 Configuring the URL method will allow you to choose the prefix you wish to use for each installed language. Using a custom prefix along with the language name you set means that you can use approved codes (as mentioned above) without being culturally insensitive to your users.

For example, on a recent project requiring Hmong translations, we did not have a pre-existing prefix. On the backend, we used the pre-existing Vietnamese prefix but rewrote it to display "hm" instead of "vi" (recognizing that these are two different languages).

Language names can also be translated in the Languages interface.

As you may suspect, each translation type governs a major area of the site. Content translation allows editors to add content in each language, but the content entities which will allow translation must be enabled by site builders. Configuration translation is translation done by site builders for things like field labels, views, and webforms. Interface translation covers the admin interface and custom Twig/PHP strings that have been coded as translatable by developers.

Every content entity in Drupal can be translated, but each one has to have translation enabled by a site builder. Thankfully, all entities can be enabled from one screen. Go to Configuration > Content Language and Translation (note that this page may take a long time to load depending on the size of your site) and select the entity types you wish to be translatable. 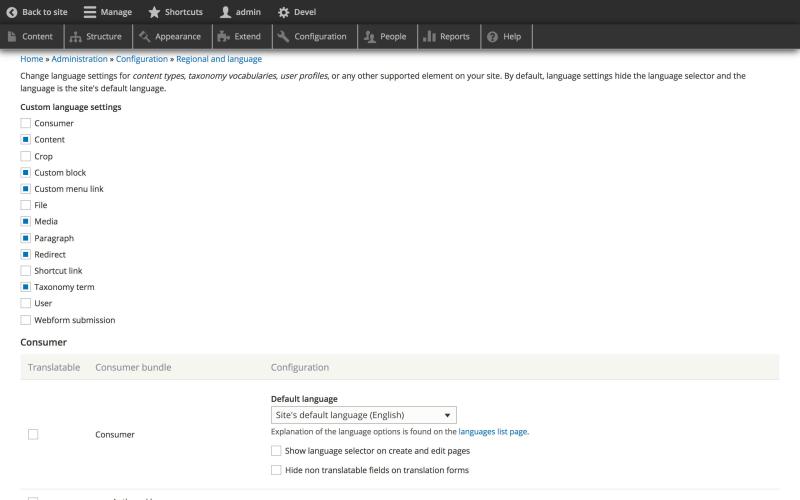 For each entity type that you enable translation for, you can then select the bundles and the fields on each bundle that you wish to translate. You can also choose whether to hide non-translatable fields for bundle, the default language, and whether or not you want to show a language selector on create and edit pages. NOTE: If using the Metatags or Paragraphs module, do not hide non-translatable fields. Metatags will throw a fatal error and Paragraphs will not be able to be accessed for translation if you do.

Once translation is enabled for an entity bundle, a new Translation operation will become available for editors in the operations dropdown and local tasks tabs of the entity bundle. 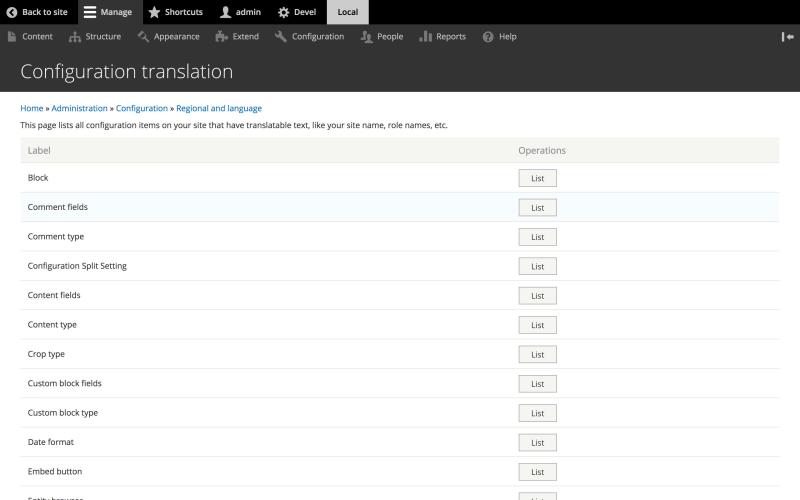 Configuration translation can be done for any entity, but translation for most entity configurations will not be seen by an end-user. For example, when translating a content type—only the content type name, description and the label of the title field are translatable. It may be beneficial to translate these if you have multilingual editors, but on most sites, an end-user will not see any of these.

Instead, you’ll want to translate the fields on the content type via the Manage fields interface to add translated field labels and select list options and things a user will actually see. This same method should be used for the configuration translation of any fielded entity.

When translating a View, the entire View and all its displays are translated in a single page with nested form elements (think collapsed field groups), some of which are obscurely named. In order to translate something like a filter label for a view display you need to burrow down into the display, then the display options, click deeper into the filters, where you hopefully guess the correct one to translate and drill into it, then finally into the exposed option before you can translate the label. 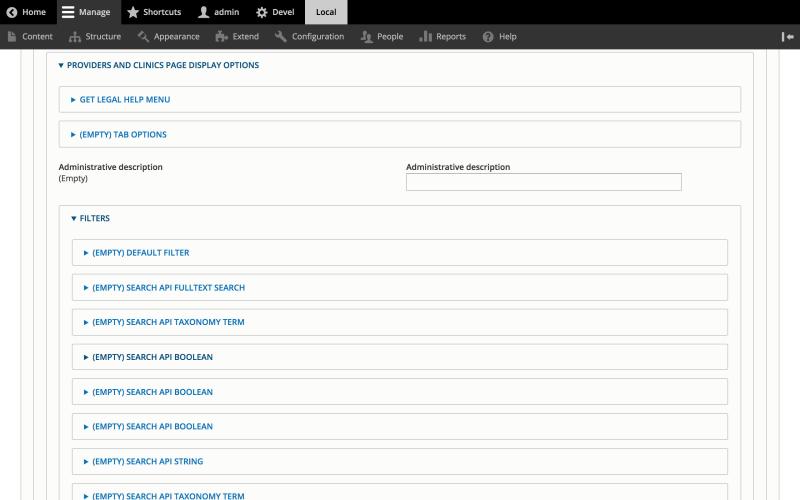 Interface translation can be be reached by going to Configuration > User Interface Translation. Any text in the administration interface as well as any Twig strings and PHP strings coded as translatable can be translated from this UI.

Developers of a multilingual site should code all custom text strings using the {% trans %} tag in Twig or the t() wrapper in PHP. Once the strings are coded with the proper wrapper, you need to clear the site cache and visit a page that the translated text will appear on in order for the string to show up in interface translation when doing a String contains search. 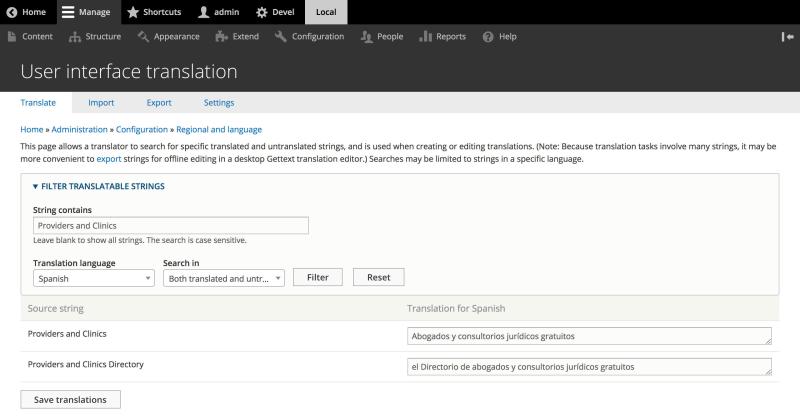 Once the text appears when searching the translation UI, simply select the language you with to translate into, click Filter and enter the translation. NOTE: Interface translations count as content so they can be done directly on a live site without having to go through the configuration management workflow.

You now know the basics of building a Drupal 8 multilingual site with core modules and no custom code. The methods discussed in this post will work for any out-of-the-box Drupal site, but what about sites with more complex data models?

Adam has a BFA in graphic design from the Minneapolis College of Art and Design, and has been specializing in web design and development since 2013, working with a variety of large and small clients. More about Adam » 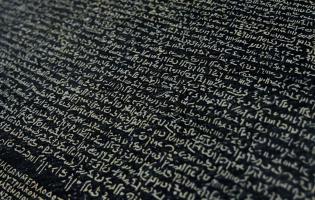 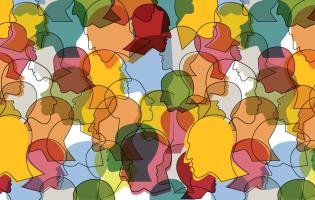 Tips and techniques to improve the multilingual experience with Drupal 8